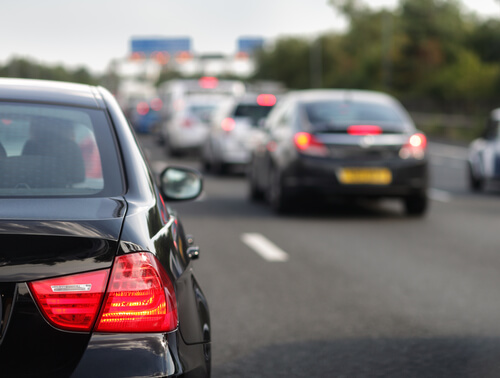 A Muslim man was called a ‘p*ki b*stard’, threatened with violence, and had his car damaged by a racist motorist.

The incident took place on June 10 at around 13:12 GMT on a busy Hertfordshire road.

Speaking to Tell MAMA anonymously, the man confirmed that he and his family were initially stuck in traffic when the incident occurred.

When traffic began to briefly and slowly move, he was delayed by only a few seconds as his wife had left the vehicle to get some air.

Despite the brief delay, a man in a red van began shouting at him to ‘pull over’ amid more general abuse.

The red van driver was then able to get directly behind the Muslim family’s car when the traffic eased as several cars had switched lanes.

A man then exited from the passenger’s side of the red van and continued to shout abuse, as he moved closer, he hit the roof and the driver’s window ‘very hard’ and kept repeating: “”You p*ki b*stard, come out I’ll show you who is stronger here, you scumbag, go back you f****** p*ki” before returning to the van.

The Muslim man’s young daughter was in the car throughout the incident which caused her and the family great upset and fear. He described how the attack ‘horrified’ him and had left him ‘shaken’.

Hertfordshire Police are investigating the incident.

The Muslim man added that the man had caused a rather ‘large’ dent in his car.

In 2016, Tell MAMA verified 38 reports (6 per cent) of Islamophobic and anti-Muslim incidents on roads and highways.

The perpetrator is described as being a white male, in his 30s to 40s, with a heavy-set build.