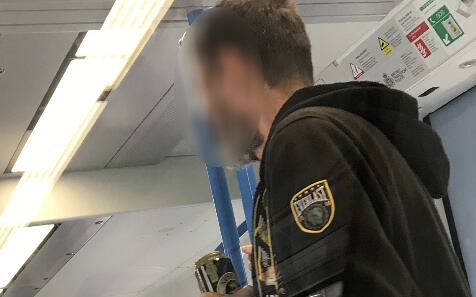 A Muslim woman was repeatedly called a ‘dirty f**king bomber’ on a train by a drunk male.

The Bengali woman, in her twenties, was travelling on the Thameslink network in London with her mother, who wears the hijab when she noticed a man staring at her.

Speaking to Tell MAMA anonymously, the woman described how she felt threatened by his stares, given his unkempt appearance and the can of alcohol in his hand. He then mumbled ‘dirty f**king bomber’ several times. The Islamophobic abuse was within earshot of the woman and other passengers.

She was able to photograph the perpetrator when safe to do.

The perpetrator is said to be a bearded white male, in his 40s or 50s, who spoke with a regional accent, and was wearing a black sports-branded hoodie and black tracksuit bottoms.

In our 2016 annual report, 85 incidents (13 per cent) took place on transport networks,  which includes all forms of public transport and extends to bus stops, coach stations, train stations and London Underground stations.

The British Transport Police are now investigating the incident.

In a statement to Tell MAMA, she said: “When he made his remarks and stared in my direction, I felt I had to hide away in my seat and also use a different exit to get off the train to avoid more abuse.

“Being referred to as a ‘bomber’ and ‘dirty’ made me feel like I had to be held accountable for something, and that I was beneath others, just because of my skin colour.

“Regardless of your background or religious belief, everyone has the right to commute and go about their day without being targeted and made to feel like they have to hide away from others.”