Members of the neo-Nazi group The System Resistance Network (SRN) have distributed anti-refugee, homophobic, and antisemitic flyers in Dundee and Cambridge.

The Courier reported that locals had torn down the anti-refugee flyers in the Marketgait area of Dundee on Tuesday morning.

Less than a mile away, the group targeted an LGBT support service with flyers which praised Aids as a ‘cure’ for ‘faggotry’. 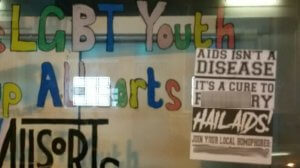 The shocking and vile homophobic flyers targeted a local LGBT group in Dundee.

Tell MAMA reported back in September that the group had distributed disturbing homophobic flyers in the Southampton area.

The social media activity of the group suggests some coordination of its activists in England and Wales. Despite their small size, the group has increased its activity both online and offline, expanding its geographic reach, and ability to spread race hate and bigotry.

An antisemitic appeared on a sign for the Christ’s Pieces park in central Cambridge. The text featured the racial epithet ‘k*ke’. 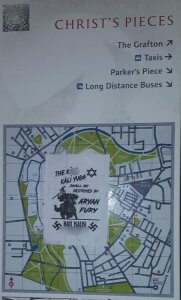 The antisemitic flyer was distributed in Cambridge.

Flyers distributed near Cambridge University juxtaposed a swastika over legal scales with the text ‘Justice Awaits You’. The same flyer appeared in Wales on November 30, per their social media.

A propaganda video from the group suggests that its members have targeted parts of Wales before. YouTube has now placed a region block on their account but remains accessible.

We warned that the proscribed neo-Nazi terror group National Action could be operating under the System Resistance Network banner, like with the proscribed NS131 and Scottish Dawn groups.

The SRN continues to use the encrypted Tutanota email service. Its propaganda mirrors the above groups.

If the SRN is not affiliated with National Action but inspired by it, it demonstrates their enduring influence on neo-Nazi groups domestically, which is of great concern, so is their uptake in activity, having rebranded from Vanguard Britannia in June 2017.

David Anderson QC, the former terrorism watchdog’s investigation into internal reviews by the security services and police following the wave of terror attacks in Britain this year, called for an increased role for MI5 and the JTAC  ‘in so-called domestic extremism work, including in particular XRW [Extreme Right-Wing] terrorism’. Anderson added this aim is to ‘ensure the equivalence of processes in analysing and dealing with all kinds of terrorism, irrespective of the ideology that inspires them’.

The report notes that the known level of attack-planning for far-right terrorism was much lower, and remains impossible to quantify the number of thwarted far-right terror attacks since October 2013. This uncertainty relates, in part, to the activity of lone wolf actors, and whether they ‘crossed’ the threshold from hate crime to terrorism. Anderson QC gave two examples of recent attack-planning which included the purchase of firearms and the construction of viable explosives, adding that the police assessment indicated the individuals had the resources and knowledge to carry out the attacks.