Virgin Media, one of the UK’s biggest broadband providers, has launched a new campaign that centres on the skateboarder Aamira, who wears the hijab, and is part of the Melanin Skate Gals & Pals collective. 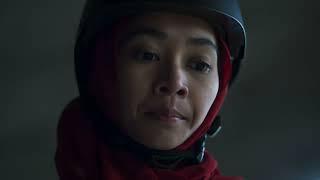 Melanin Skate Gals & Pals is a London-based collective that empowers minoritised and marginalised groups through skateboarding and social action, per their Instagram.

The advert begins with Aamira’s initial skateboarding troubles. And, by its conclusion, thanks to the support and friendships made in the collective, she can perform the “drop-in” successfully which brings collective cheer and celebration.

A press release from the company details how the ‘We’re better, connected’ campaign, created by Adam & Eve/DDB, forms part of Virgin Media’s ambition for more inclusivity in their advertising campaign. Their internal research revealed the inclusivity of skating communities both online and offline, which they sought to represent with this campaign.

The campaign had its television launch during the broadcast of Manchester United’s FA Cup tie against Middlesbrough on February 4.

The Drum praised the campaign, calling it their advert of the day when it premiered.

Paul Knott, creative director at Adam & Eve/DDB, said: “The campaign is an example of how technology can unite people from different backgrounds and communities, enabling them to share in their pursuits, often in unexpected and serendipitous ways.” Simon Groves, the Executive Director of Brand and Marketing at Virgin Media O2, mentioned the new campaign: “shows just how integral the internet is in inspiring us, connecting us, and helping us achieve our dreams, no matter what our background.”

On social media, Tell MAMA documented several reports of racist speech targeting the campaign, with some falsely accusing the company of pushing a “woke” agenda that a “majority does not recognise” to others pushing hate speech about demographics with the infamous “#WhiteLivesMatters” hashtag.

One example of the racist response to the Virgin Media campaign, as reported to us by a member of the public.

We continue to urge the public to report such content across any major social media platform, given our trusted flagger status.

We've been made aware of some disgusting racist comments made in response to a @virginmedia campaign that centres on a hijabi Muslim skateboarder – we’ve since flagged them with Twitter for removal.

More broadly, stories about the Melanin Skate Gals & Pals collective have appeared in other media outlets in recent months. For example, the zine writer and fashion photographer Martus Chai photographed members of Melanin Skate Gals & Pals which was featured in the i-D magazine last December. Chai reflected how the collective creates a safe space for queer and POC skaters, mentioning that fashion “became a way to embrace a marginalised group within our community.”

Marie Mayassi, who founded the collective, told This Girl Can, “I really encourage anyone who wants to start skateboarding to actually try and find a collective where they feel like they fit, but also to not hesitate to start their own initiative if they don’t feel like any of the collectives are catering for their feelings.”