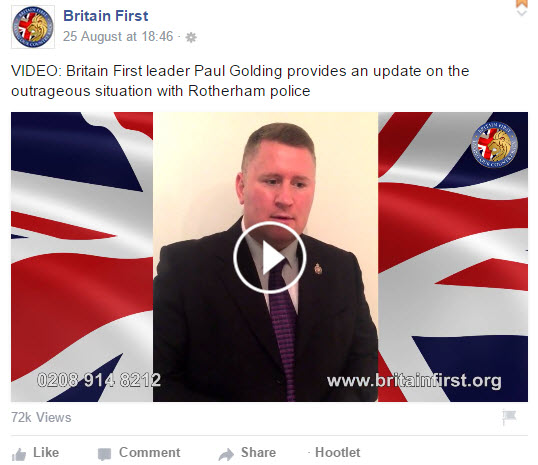 We highlighted the murder of Mushin Ahmed and the impact on local Muslim communities in Rotherham because of this murder has been significant. We have also continued to highlight the kinds of comments from sympathisers of Britain First and this post shows the vile nature of their postings about the death of over 71 mainly Syrian refugees in Austria.

This is the shocking statement that has been reported to us where Paul Golding, the self-proposed leader of Britain First, tried to justify possible reasons for the brutal attack and killing of 81 year old Mushin Ahmed. These are the comments and you can judge for yourself:

2:12 mins – “She (a female officer), said that there was a racist murder in town last week, and the community in Rotherham are saying it is all because of right wing groups………You could say conversely that this murder………was due to the fact that there was a huge Muslim grooming scandal that the Council and the police conspired to cover up and this has caused anger amongst the English people and 2 criminals have now gone out there and done something like that.“

Once again, Golding uses ‘Muslim grooming’ as a way of dividing communities. The statement is purposeful and splits the local Rotherham community along the lines of faith. This is done we believe, intentionally, given the context of the group that we are dealing with and given that most of their material on-line focusses on ‘Muslims.’

Those people reading his statement will be sickened by the posturing and the attempted justification for the possible reasons for the murder of Mushin Ahmed. Instead of condemning it outright and saying that there is no justification for the murder of a grandfather simply going to pray, Golding’s statements appear to lay the blame on the local authority, the police and Muslims. It is a sickening statement and one which deserves nothing but our collective contempt.

Finally, on the 5th of September, Britain First state they will march into the centre of Rotherham . Indications from local residents and from local Muslim groups to Tell MAMA, are that some young people are angry and suggesting that they want to take matters into their hands. We have actively counselled against such action and advised that all residents inform Tell MAMA or the police if they are targeted by Britain First members. Passions are running high amongst young people and we urge local residents to remain within the law and to work with local law enforcement and if need be, us, to ensure the peace in the town. Remaining lawful is key.

If you would like to contact us and to speak about a matter concerning matters in Rotherham around the forthcoming Britain First march, you can call us on 0800 456 1226 or you can e-mail us on info@tellmamauk.org. You can also tweet us @tellmamauk and Facebook us at TellMAMAUK. All correspondence will remain confidential.