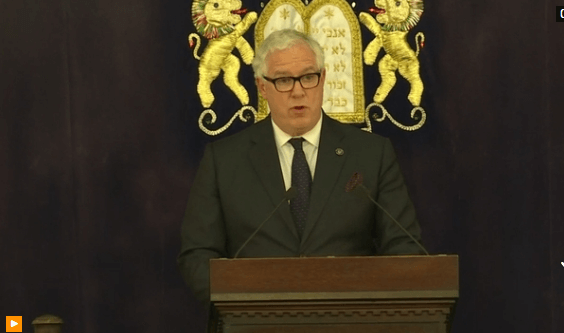 A St. Louis man made at least eight bomb threats to Jewish organizations across the United States in a months-long effort to denigrate an ex-girlfriend, U.S. prosecutors said on Friday (March 3).

Juan Thompson, 31, was taken into custody on Friday morning in St. Louis, the first arrest to result from a federal investigation into a wave of threats against Jewish Community Centers (JCCs) and schools that has rattled the Jewish community.

It was not clear whether investigators believe Thompson is responsible for more than 100 threats made against JCCs by phone in dozens of states since January.

In a criminal complaint filed in federal court in Manhattan, authorities accused Thompson of making at least eight threats, mostly by email. He is charged with one count of cyberstalking.

Jewish groups have received five waves of hoax bomb threats this year, stoking fears of a resurgence in anti-Semitism. The calls forced many of the centers to be evacuated, including some with day care for young children.

Thompson was a reporter for the Intercept, a news website focused on national security, until he was fired in January 2016 after the website said he had invented sources and quotes.

In a statement, Intercept editor Betsy Reed said the website was “horrified” that Thompson had been arrested for what she called “heinous” acts, but said she had no more information.

Last year, the Intercept said Thompson created a fake email account to hide his fabrications, the same technique that federal authorities have accused him of using for the bomb threats.

A woman that Thompson was dating broke up with him in July 2016, prompting months of his increasingly harassing online behavior, according to the complaint.

A day after they broke up, Thompson sent an email purporting to be from a producer at a national news organization to her boss at a social service organization in New York, according to the complaint. The email claimed she had been pulled over for drunk driving and sued for spreading a sexually transmitted disease.