TalkRADIO, the Daily Express, and Daily Star have all removed content after the North West Ambulance Service (NWAS) had “no reason to believe” allegations made on a radio broadcast that a paramedic had been denied entry to treat a heart attack patient at mosque due to their sexual orientation, following an internal investigation.

The TalkRADIO interview appeared on their Twitter account on March 27, before removal, and read: “Gay paramedic Tom says he was stopped from entering a mosque in Oldham to render assistance to a heart attack victim and lives in constant fear after death threats.” The original tweet had gained over 300 retweets before its removal.

Various far-right websites and Facebook pages had shared the content or reposted it on their websites, adding further layers to their ideological bivouacs, an issue long-highlighted in Tell MAMA’s reports and research. To not give undue attention further, we are not naming these examples.

A day later, the Express newspaper embedded a segment of the TalkRADIO interview under the headline, “Gay paramedic says he was ‘refused entry’ to a mosque” but did not expand the story further.

That same day, however, a more detailed variation of the falsehood appeared on the Daily Star, headlined: “Gay paramedic says he was refused entry to a mosque to treat heart attack patient” as the sub-heading placed the mosque in Manchester, not Oldham, as TalkRADIO has tweeted, though on its official Facebook, TalkRADIO had listed the mosque’s location as Manchester (as confirmed by the URL link) in a now-deleted post.

The Daily Star article quoting from the interview claims that the caller who identified as a pracademic had made a complaint to the North West Ambulance Service, who had, in turn, ‘spoken to the Imam’. Other comments transcribed from the interview perpetuated anti-Muslim and Islamophobic falsehoods about ‘no-go zones‘, which continues to endure.

Given the serious nature of the allegations, the North West Ambulance Service investigated, and in a statement published on March 29, the thorough investigation concluded that “the local management team have not been informed of any such exchange taking place”.

The statement added: “we therefore have no reason to believe that the allegations made by someone maintaining to be an NWAS member of staff are true,” adding that they maintain good relations with faith leaders across the region and do not see the comments as ‘representative of the situation’ in their local communities. The NWAS tweeted the statement two additional times in reply to TalkRADIO and the interview host, Cristo Foufas.

The Official NWAS LGBT Network Twitter account tweeted, “We’ve been made aware of this incident and are confident this was not a member of our staff,” adding how they value the work of faith leaders in the local area, and “look forward to renewing these Positive relationships very soon.”

The Daily Star also deleted tweets that had shared the falsehood on March 28. 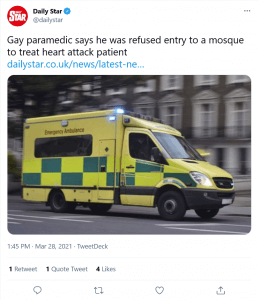 As of writing, neither the Daily Star nor the Daily Express has acknowledged the removal nor apologised.

Cristo Foufas, however, during a segment yesterday on TalkRADIO, stated that they had made multiple attempts to contact the caller but had yet to receive a response, saying: “That it could be that we’ve been duped. It could be that his story was an absolute load of rubbish, and the trust I have, when people call this show, was broken, and that I was and my team were duped by that call, and if we were, I’m really sorry.”

He added that an ‘immediate decision’ had been taken from management to remove all content of the interview from social media following the tweet from the NWAS as they could not verify the details further.