Tesco praised for inclusive “Together this Ramadan” billboard campaign

Aline Santos Farhat, Unilever’s Chief Brand Officer and Chief Equity Diversity & Inclusion Officer, praised the “refreshing and creative” direction of the campaign, as the advert, “features empty plates which only fill with food after the sun sets. Just like the 1.6 billion Muslims globally, who break their fast at Iftar every evening during Ramadan.”

The post gained hundreds of shares and thousands of positive reactions on the platform, with many praising its brilliance.

Despite boasting millions of Muslim customers every year, The Drum reported that this advert forms part of their broader commitment to inclusive marketing. 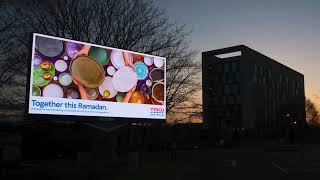 The “Together this Ramadan” billboard campaign, in partnership with Bartle Bogle Hegarty, puts the onus on the significance of Iftar, as when the sun settles into the night, the billboard fills the once empty plates with food (the billboards face eastwards to capture the sun setting behind them) – for around three hours before vanishing again, according to Campaign Live.

The complete tagline reads, “Together this Ramadan: In honour of everyone fasting, these plates only fill up as the sun goes down.”

Helen Rhodes, the executive creative director of Bartle Bogle Hegarty, said,” We really wanted to make something that spoke to the community.”

The campaign involved the inclusion consultancy The Unmistakables, and their director and founder, Asad Dhunna, said in a statement: “Our stereotype study revealed that, within the broader media landscape, 67% of Muslim people feel they are portrayed in a negative light in the media, so it is our job to help brands stand behind the community and stave off any negative criticisms.”

The campaign was meticulous in its attention to detail, with those in charge keen to ensure other adverts, for example, selling alcohol, did not play in between, with the billboards popping up in areas like Bradford, Brent, and Birmingham.