US Muslim Women Strike Back Against Hate Crimes 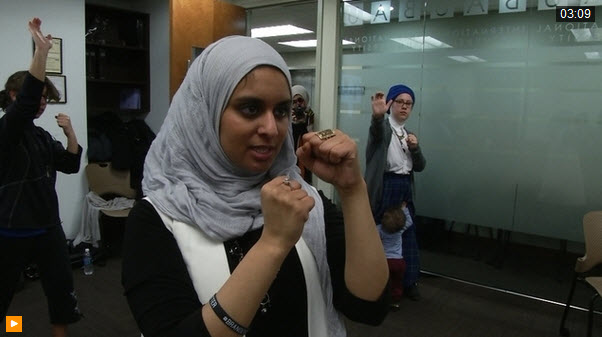 With women now thought to be the targets in 80 percent of anti-Muslim hate crimes reported in the U.S., one group is helping Muslim-American women in hijab protect themselves against their attackers, with their bare hands. Mana Rabiee reports.

Situations like the one she found herself in at the age of 16, when a man tried to pull off her head scarf. It was then she decided she wanted to help other Muslim women to protect themselves.

Muslim American groups say the number of anti-Muslim hate crimes in the U.S. has tripled since the Paris attacks and the San Bernardino shootings.

And they say 80 percent of the victims are women, largely because the same hijab Muslim women wear for modesty makes them more visible, turning them into what Abdelhamid calls “walking targets”. She stated:

“They feel like people are staring at them. They feel ashamed… You can be attacked at any point you can be pushed off of, you know, off of a subway ledge. All these different things that go through these young women’s minds, as something that increases their vulnerability and increases their sense of fear.”

Muslim advocacy groups put a lot of the blame for this uptick in bias crimes against their community on the anti-Muslim rhetoric that’s crept into the U.S. presidential campaign.

Ibrahim Hooper is spokesman for the Council on American-Islamic Relations, the largest Muslim civil rights group in the Sates. He stated:

“Even after 9/11 Islamophobia was there but it was on the fringe of society. Now thanks to Donald Trump and Ben Carson and others Islamophobia is firmly in the mainstream where these people who attack Muslims on the local level they view it as almost their patriotic duty based on their this kind of extremist, bigoted rhetoric.”

Women like Kristin Garrity Sekerci, say they sense this increased anti-Muslim sentiment in their everyday lives. She went onto say:

“You stand out. And yeah it’s not fair, but it’s the reality and you have to equip yourself to be able to face that.”

They learn the physical techniques to neutralize an attacker – but something else, too. The psychological impact of feeling less vulnerable. Hind Essayegh, a student, went onto comment that,

“You just feel this rush of adrenaline in your body and you just want to conquer the world. It’s really empowering.”