Why did BBC Covid-19 coverage reuse the same image of a Muslim woman? 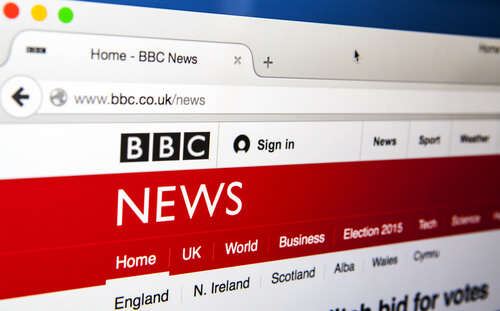 BBC Wales used the same stock image of a Muslim woman in a hijab in two unrelated Covid-19 stories in just three weeks.

The recent examples bring the focus back to a broader structural problem in the media: linking minoritised communities to a virus risks harm and stigma towards them – with the most recent example appearing yesterday (March 22). 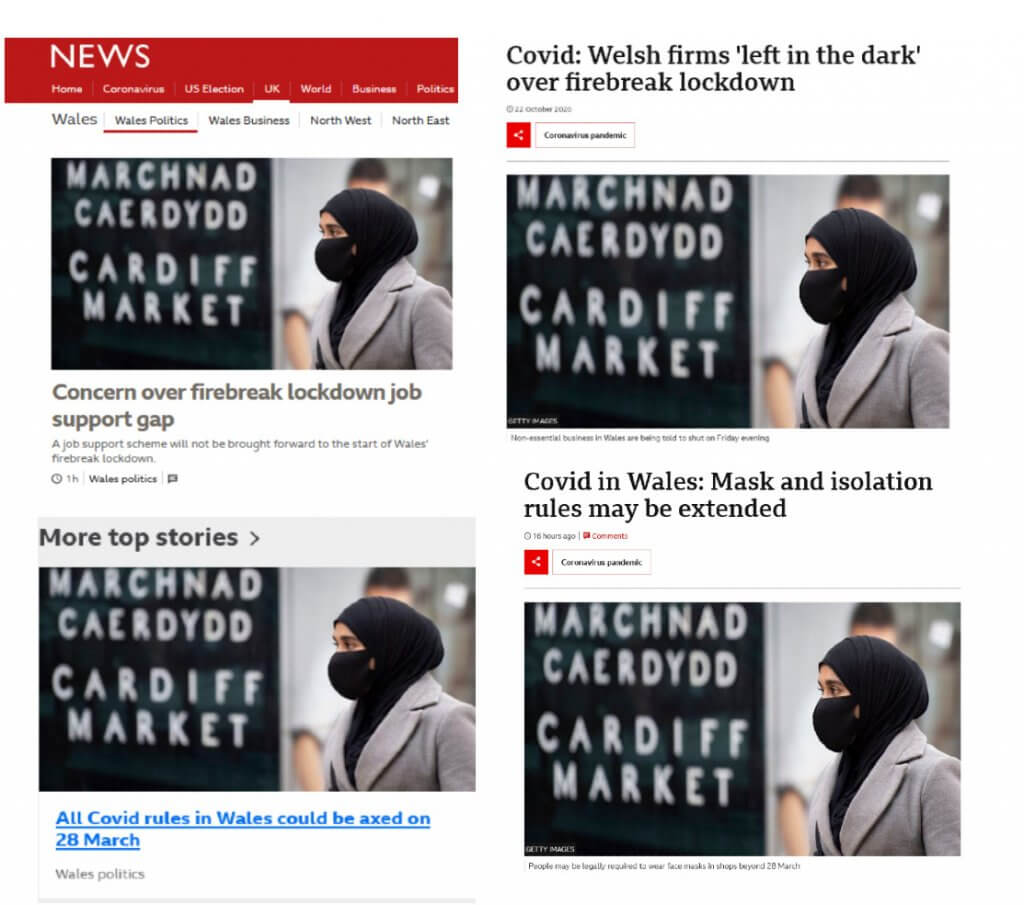 Examples of the same stock image of the Muslim woman in a hijab across four BBC Wales articles between October 2020 and March 2022.

The most recent BBC Wales headline read “Covid in Wales: Mask and isolation rules may be extended.” And, at the bottom section, which encourages readers to click on related stories, an article published on March 4, continues to feature the same stock image in an article about the ending of mass testing for Covid-19 in Wales. 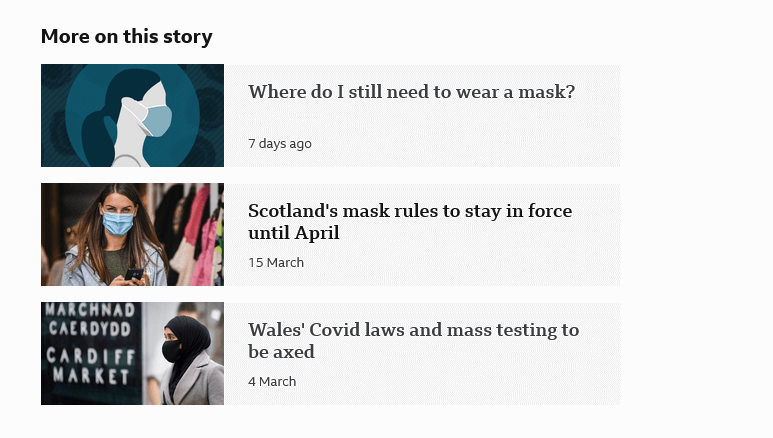 It also gained due prominence, appearing on the main coronavirus news section on the general BBC News website.

A failure to update the image cache means that the stock image continues to appear on March 4 despite the BBC updating it to feature a video.

We can also trace previous examples of the BBC using this stock image in earlier stories. Two such examples emerged within two days of each other.

The BBC, however, did amend both versions – replacing them with more generalised images. One of the images appeared under the headline “Covid: Welsh firms ‘left in the dark’ over firebreak lockdown,” published October 22, 2020. Two days earlier, a different story, headlined, “Covid: Wales’ lockdown job support gap ‘a barrier to firms’,” before a headline re-write “Covid: Redundancy warning in lockdown appeal to Treasury” and a new image headline.

A BBC Wales article about the Job Support Scheme headlined "Covid: Wales' lockdown job support gap 'a barrier to firms'" has since removed a stock image of a Muslim woman in a hijab. The story now leads with interviews with local business owners. pic.twitter.com/NeH0cu8rGY

The BBC did go on to update and replace the original headline and image from our fourth example. Such revisions included a new headline and a video story replacing the stock image, which appeared online on March 4, 2022.

For this article, we researched the use of this stock image via the image reverse search engine TinEye (we’ve talked about it before) to help us find any examples we may have overlooked, but the results given focused its use on the BBC. The issue of media framing, of course, is far larger than just the BBC.

The origins of the stock image we could also trace – it appeared on Getty Images a day before the first BBC article cited above on October 19, 2020 – the text begins, “A woman wears a face mask as she walks past a sign for Cardiff Market.”

It is worth noting that during our search of Getty Images to locate this example, amidst the 72 pages of results for coronavirus with a filter for Cardiff and Wales revealed that a disproportionate number of the earliest results featuring people included photos of East and Southeast Asian (ESEA), South Asian, and other ethnic minorities.

Studies and research show the link between uptakes in racism towards ESEA and Asian-American and Pacific Island (AAPI) communities across North America.

Tell MAMA and many others, including ESEA community groups, work to document, challenge, and detail why such use of stock imagery is problematising.

In broader terms, another example we cited concerned a BBC News article about the Delta variant in Bedford (re-named to avoid stigma), foregrounded a stock photo of a South Asian family under a headline that included the line, “Indian variant areas”. The article even acknowledged this variant name change, stating that Bedford was an area identified as a “hotspot for the so-called Indian variant, now named the Delta variant by the World Health Organisation”.

From racialised disinformation about Muslim communities during the national lockdowns, abuse blaming Muslims for the spread of the coronavirus when in supermarkets, to shocking assault cases where racist men have coughed on a Muslim woman or families whilst to have the virus or seeking to spread it, we have continued to document the varieties of abuse directed at Muslims during the pandemic.