Why Is There A Quran Page on the Floor in Fireman Sam?

Fireman Sam and his firefighters usually ensure that the residents in the fictional Welsh rural village of Pontypandy are safe and protected against fires. The community oriented fireman has been in existence since 1987. A well-known brand, Fireman Sam has also promoted fire safety and generally has stayed away from issues of controversy given that the target audience has been young children.

Yet, in this 2014 production of Fireman Sam, (which has been sent to us by 4 separate people today), Fireman Sam seems to slip over when bringing in teas for his colleagues and with the result that as he slips and falls, a Qu’ran page flies into the air. (The Qu’ran page in question is actually from the Chapter ‘Al-Mulk’ – The Sovereignty, verse 14).

The impression given by those reporting into us is that this was deliberately done. Yet, the bizarre and random nature of a Qu’ran page in a Fireman Sam animation flying up into the air does raise the question as to what was it doing in this animation in the first place? Furthermore, this may seem like a trivial matter to some, but the impacts around such matters do affect perceptions. Those reporting into us believe that the Qu’ran page was on the floor and that the fireman slipped on the page.

In the end, what seems like a trivial matter to some, is certainly not a trivial matter to others who believe in the sanctity of holy texts. Maybe, some care can be taken in the future on including sacred religious texts when there is no relevance to the story whatsoever. 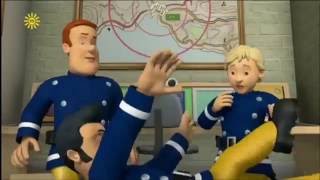