Why was a far-right activist ‘invited’ onto a Counter Terrorism Advisory Group panel? 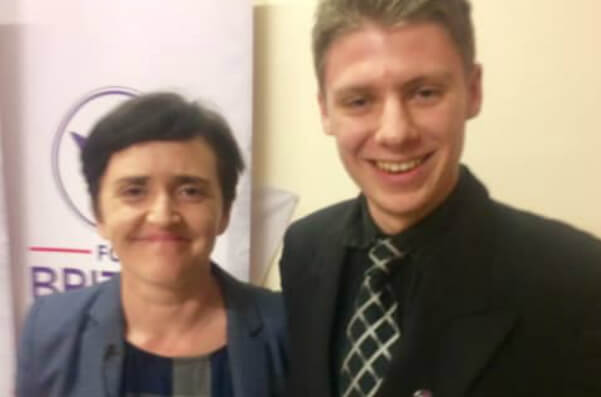 A political candidate for the far-right For Britain party was pictured making the “okay” hand gesture, which depending on the context, has been used by white supremacists like terror suspect Brenton Tarrant and so-called ‘alt-right’ trolls, at a far-right event last year, a Tell MAMA investigation can reveal. 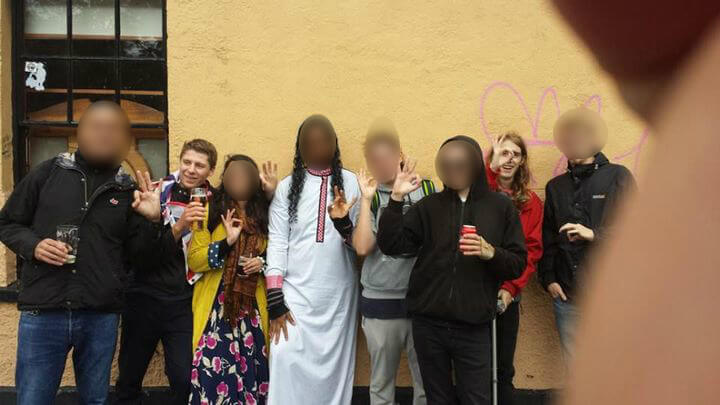 There’s another immediate concern: why was an individual, whose views on the For Britain group are traceable in 2017, who has been referred to Prevent, was able to secure such an invitation.

The photograph of Mr Rufolo and others making the “okay” hand gesture appeared on the social storytelling website Wattpad last year, in a poem titled “Union Flag” where he recalled attending a far-right rally. Without context or explanation, the photograph in question appeared at the end of the poem.

During a pro-Brexit protest in Exeter with well-known Islamophobe Katie Hopkins, Frankie Rufolo was pictured in an “Anti-Communist Action” t-shirt, the logo on this shirt, however, is closer to the neo-Nazi “anticom” front, which differs from the version sold by the US-based ‘Liberty Hangout’. 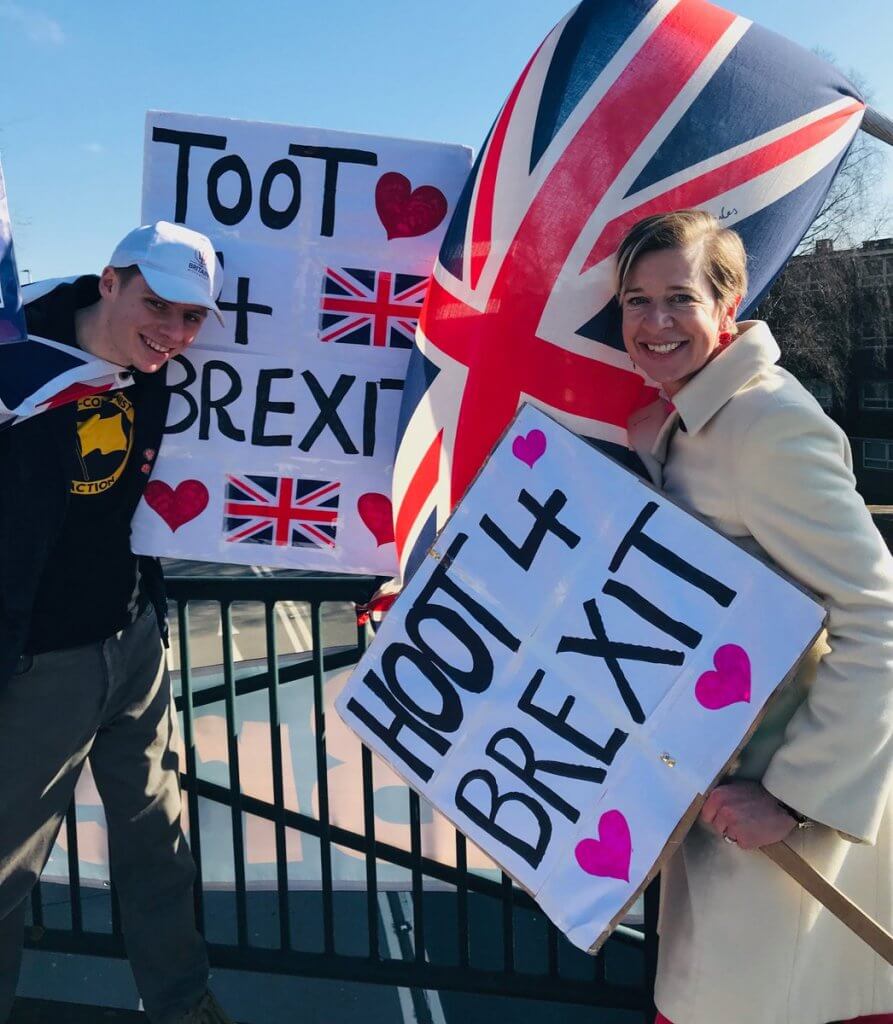 Mr Rufolo, however, has ‘liked’ the Facebook page of the former. The page has engaged in Holocaust revisionism, including placing the number of Jewish Holocaust victims in quotation marks. Anticom helped to organise a neo-Nazi rally in Shelbyville in 2017 under the ‘White Lives Matter’ hashtag and provided security for the neo-Nazi Richard Spencer. The anticom Facebook page continues to post violent memes which target the likes of Alexandria Ocasio-Cortez, which mirrors the authoritarian violence of General Pinochet in Chile. Violently Islamophobic memes have also appeared on the Anticom Twitter account.

News of the Exeter bridge protest went viral after a man threatened to throw Mr Rufolo and a woman off the bridge. 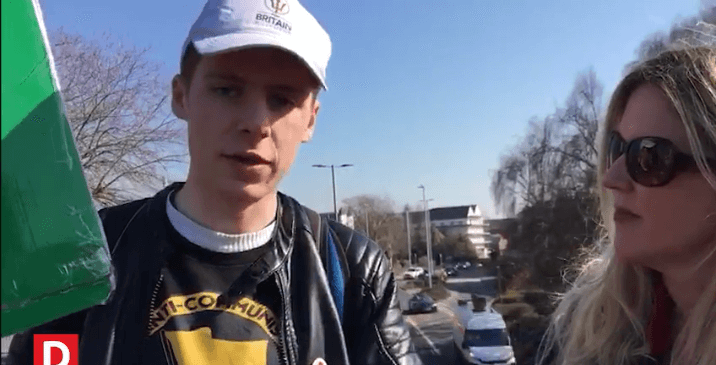 Frankie Rufolo made headlines again after he burnt a copy of the Holy Quran in an Exeter pub following a ‘heated’ political debate.

Writing for “Make Britain Great Again”, the website of Luke Nash-Jones in 2017, an individual linked to the far-right storming of a left-wing bookshop in central London last year, Rufolo attempted to push the racialised idea of ‘Muslim-on-Muslim violence’, echoing a similar mythologised trope of ‘black-on-black violence’. 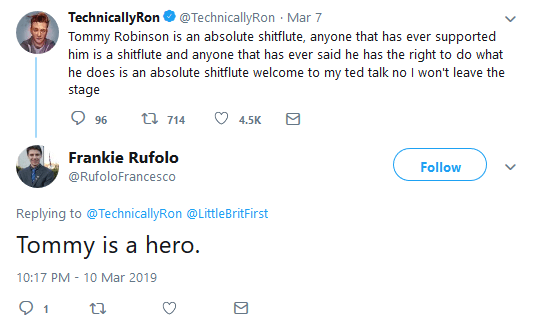 On January 25, Rufolo tweeted, “Islam is evil and the sooner it dies out, the better.” Other notable tweets include a reference to a “Muslim rape gang” and following news of a stabbing in London, made a crude reference to London’s first Muslim mayor, Sadiq Khan, with the phrase “Khanage”’.

Other controversial ‘likes’ on the Facebook of Mr Rufolo includes the extremist Hindu nationalist Tapan Ghosh, who once claimed that “backwardsness is the most ‘powerful’ weapon of Islam,” was invited into parliament by Conservative MP Bob Blackman. Tell MAMA wrote a formal complaint to parliament following the appearances of Ghosh in 2017.

Photographs with the leader of For Britain, Anne Marie Waters, who expressed a desire to close mosques, end immigration from Muslim-majority countries, and for deportations, when standing for Ukip in 2015, appear on his social media.

Anne Marie Waters has sat on the leadership committee of Pegida UK, alongside Stephen Yaxley-Lennon and Paul Weston. In 2014, Ms Waters shared a platform with Lars Hedegaard, an individual who forms part of the wider ‘counter-Jihad’ network.

He gave the Facebook page of Carl Benjamin (aka Sargon of Akkad) a 5-star review, adding that he was an “absolute lad”. Mr Benjamin, who intends to run as a candidate for Ukip at the upcoming European elections, was back in the news after their rape tweet to Labour MP Jess Phillips in 2016, was defended by Ukip leader Gerrard Batten, as “satire” during his appearance on the Andrew Marr Show. Following that tweet, Jess Phillips received over 600 rape threats.

A pro-refugee and pro-migrant group called “Lesbians and Gays Support the Migrants-Bristol” was also given a 1-star review on Facebook by Mr Rufolo. 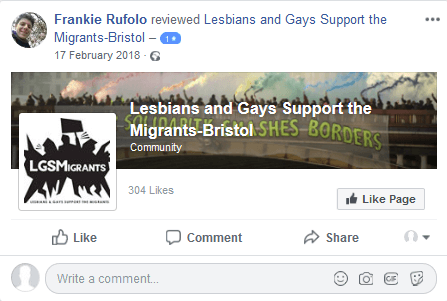 This Tell MAMA investigation raises further questions about Frankie Rufolo’s supposed involvement with any previous and future involvement in the Counter-Terrorism Advisory Group for young people.