Bacon put through letterbox of a Muslim couple in London 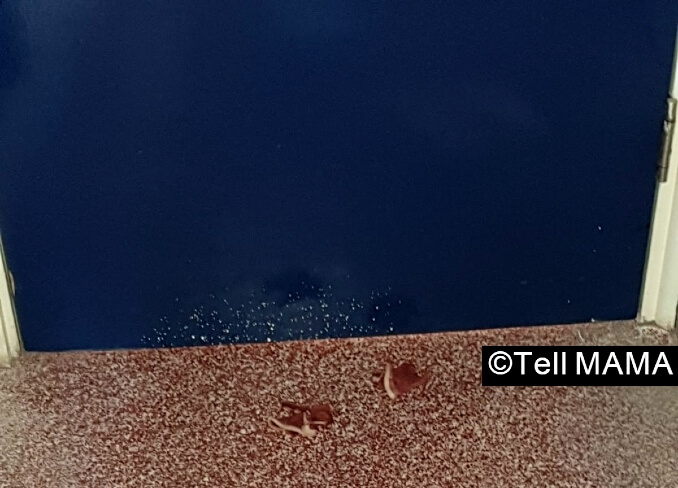 A Muslim couple, who were in the process of moving into a new flat, had pieces of bacon put through their letterbox.

The Islamophobic incident took place on the first day of the holy month of Ramadan.

Speaking to Tell MAMA, the couple stated that some of their new neighbours had been abusive days earlier, citing ‘noise complaints’ as the couple were furnishing their new apartment which they apologised for. They do, however, feel targeted for their Islamic identity as the woman wears the hijab.

The Metropolitan Police are investigating the incident.

Tell MAMA has documented similar examples where Islamophobic perpetrators have used pork products to target Muslims in their homes, including an incident in 2017, where a Muslim family found pork dumped outside of their property, as part of a sustained campaign of abuse and harassment from a neighbour.

The weaponisation of bacon and other pork products is nothing new and has been used to target mosques and other Islamic institutions.

Some have contacted Tell MAMA to report how an employee at McDonald’s put rashers of bacon in their Fillet-O-Fish.

The racialised language of Islamophobia does sometimes incorporate language around bacon, for example, the high-profile abuse of the Liverpool winger Mohamed Salah, included the hateful statement, “feed the c*nt bacon”.

But the very idea of it, for the apparent distress it caused, taps into a deeper anxiety and conspiracy theories about Muslims. Such thinking can lead to forms of othering and discriminatory acts and behaviours.