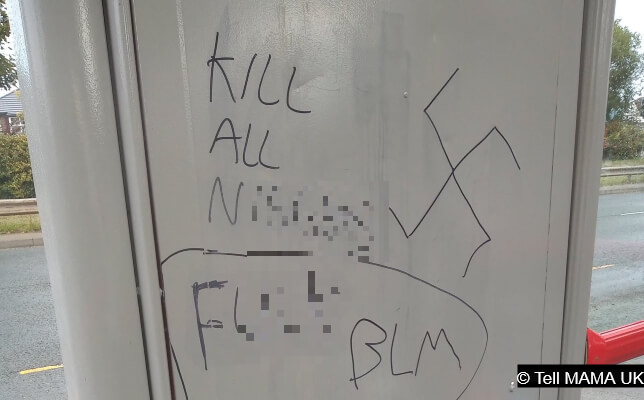 Violent, racist graffiti calling for the murder of black people appeared on a Leeds bus stop over the weekend.

A member of the public spotted the racist graffiti which included the statements “Kill all n******,” “F*** BLM,” and a Nazi swastika on a bus stop in the Selby Rd area of the city.

They reported the graffiti to West Yorkshire Police and to Tell MAMA, and consented to have the information shared anonymously.

Weeks earlier, Tell MAMA reported how a racist targeted a Muslim family in Leeds, coughing on them and saying “there you go” before walking off, on September 25.

The discovery of the shocking racist graffiti coincides with the launch of National Hate Crime Awareness Week, which aims is to bring people together in solidarity against hate crime in all its forms, and Tell MAMA is proud to support the cause and stand against all forms of racism, hatred, and bigotry.

Members of the public can submit hate crime reports online through True Vision, or in some cases, forces like Police Scotland, the Police Service of Northern Ireland (PSNI) and the Metropolitan Police use their own online reporting forms. To find your nearest police force, use the Police.UK website.

Anonymous crime reports can be made to Crimestoppers online or over the phone on 0800 555 111.

Third-party support services like Tell MAMA, can report incidents to the police or offer their own confidential support, for individuals and witnesses, and in non-criminal matters like discrimination.

A list of third-party services which support a range of communities is available here.