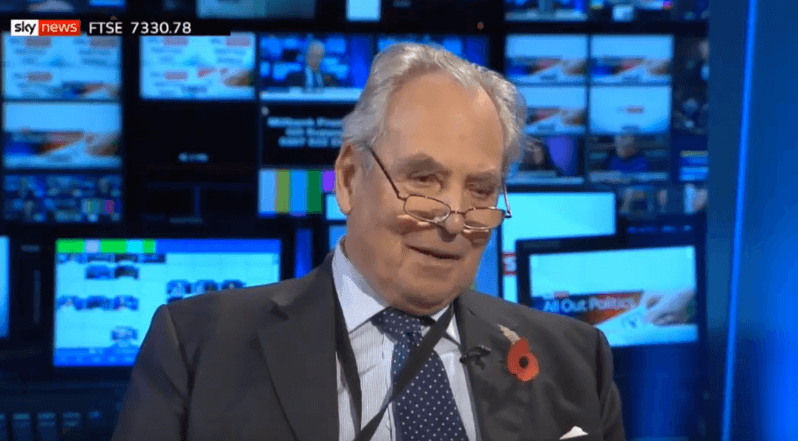 The enduring racist myth that Muslim birth rates are soon to replace ‘native’ populations reappeared on television yesterday, after Lord Pearson, formerly of UKIP, spread the falsehood that the Muslim birthrate ‘in this country is going up ten times faster than ours’.

Adam Boulton, the presenter of All Out Politics on Sky News, was correct to identify this as ‘us and them’ politics.

It’s also a form of politics unbecoming and undeserving of such a large media platform.

Lord Pearson’s central claim first appeared during a debate in the House of Lords on December 7, 2017, which referenced a “Muslim takeover of our society, at least in our major Muslim conurbations” and includes the misuse of census data.

While it is true that the Muslim population has more than doubled in a decade, the census question on religion and non-belief is of self-identification, Lord Pearson, for example, ignores the continued growth of atheism and non-belief, declining Christian belief, and how just over half of those (55 per cent) surveyed by the National Centre for Social Research believe in a God figure more broadly.

The demographics argument shifts to Muslim children outnumbering non-Muslims, which is true in some areas, like Washwood Heath in Birmingham (86 per cent) but untrue in like Bristol, for example, there were three times as many Christian children (aged 0-17) as Muslim, per the 2011 census data.

Such an argument echoes that of the Daily Mail in 2017, which ran the alarmist headline: “The changing face of Britain: A child in Birmingham is now more likely to be a Muslim than Christian”. Buried further in the article, however, was the admission that: “The figures show that Christianity is still the dominant religion in every local authority area in England and Wales, even in the most culturally diverse towns and cities”.

Again, there is a fundamental and crucial difference between birth rates and self-identifying with a religious belief like Islam. Conflation is a dangerous gambit.

Racist conspiracies about birth rates were behind the terroristic murders of 51 Muslims in Christchurch, which went on to inspire other forms of racist terror in Germany, the United States, Norway, and a sleepy English suburb.

Lord Pearson, in this House of Lord’s speech, also invoked the racialised and Islamophobic conspiracy of Taqiyya, an enduring obsession in many far-right networks and online spaces.

Baroness Williams of Trafford rebuked his remarks on Sharia law, adding it has no legal jurisdiction in England and Wales, as Lord Ahmed also challenged some of the unfounded claims from Lord Pearson.

During his appearance on All Out Politics, Lord Pearson admitted, “I’m not a great expert on Islam, although I’ve been studying it for seven years”, but advocated that Muslims in Britain practice a ‘mild’ form of their faith, and referred to the Prophet Muhammad as a ‘violent warlord’.

Tell MAMA identified in its recent annual report how such language causes deep upset and harm to Muslims, given that many seek to emulate his teachings in daily life. The report adds: “To understand why such language is so hurtful to Muslims, in particular, is to understand that Muslims believe that Muhammad was God’s final messenger who  gradually  revealed the religion of Islam, who, in his lifetime, was an administrator, commander-in-chief, a teacher, and prayer leader for the burgeoning Muslim community. Therefore, ordinary Muslims view him as a model of God’s grace and salvation, and the greatest and highest of role models as many strive to emulate his teachings in their daily lives”.

For all of Lord Pearson’s obsessive interest in Muslims and Islam in the UK, he avoids discussing how structural racism and discrimination harms Muslims in education and employment – from being denied job interviews, to the ‘Muslim penalty’ which hinders access to the salariat, to teachers holding stereotypical or low expectations of their Muslim students, with non-Muslim teachers reluctant to engage them, according to the Social Mobility Commission, incidents of racism and Islamophobia further damaged the confidence and self-esteem of young Muslims, resulting in some Muslims leaving university early, or not gaining ‘good grades’.

Almost half of Muslims in Britain (46 per cent) live in the 10% of the most deprived local authority districts.

Muslims, particularly women, face double (gender and ethnicity) or triple (low socio-economic backgrounds) penalties in the labour market, which has real long-term consequences. Which, in turn, are reflected in low pay and the disproportionate impact household poverty has on Muslims (50 per cent) compared to 18 per cent of the overall population.

The challenge of anti-Muslim and Islamophobic prejudice, violence, and discrimination warrants more media attention, not the rambling, inchoate conspiracies of an individual who, late last year, invited Stephen Yaxley-Lennon (aka Tommy Robinson) to dine at parliament, and referred to him, bizarrely, as a ‘Quranic expert’.