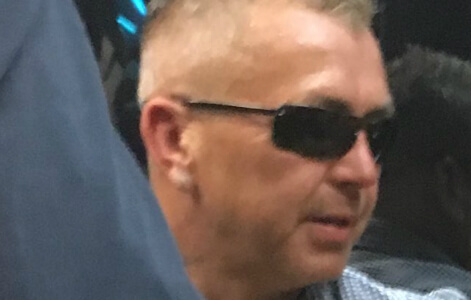 A Muslim woman photographed the man she said had targeted her and another Muslim woman because of their Islamic identity on a busy Central line train.

Speaking to Tell MAMA, she described how the man loudly said: “It’s so f**king hot, what the f**k is her problem? How dare she!” as he gesticulated his finger at her hijab from the opposite seat.

The abusive comments were repeated on several occasions until another Muslim woman, who was wearing the niqab, boarded the train.

He then said: “Oi, oi, what the f**k is this? This one is f**king worse than that one!”. He added, “come Mile End and Stratford, they’re all gonna f**king get off coz that’s where they all are.’

The Muslim woman also described how the man and his girlfriend sported bracelets which, in their own words, was ‘actually, a bit racist’.

She described the man as being white, who was in his 40s or 50s.

The abusive comments continued unchallenged for several stops until the woman departed the train, and she noted down the carriage number before exiting.

Tell MAMA reported the Islamophobic incident, which took place on June 29, to the British Transport Police (BTP) on their behalf.

Racially and religiously aggravated offences on Transport for London’s rail network have doubled in four years, following an investigation by the Evening Standard. The number of recorded offences in 2014/15 was 575, which then hit 1,143 reports in 2018/19.

Tell MAMA continues to document how Islamophobia and anti-Muslim prejudice curtails the mobility of Muslim women, including the right to use public transport free from harm, harassment, abuse, discrimination, or violence.