Melanie Phillips and the Taqiyya odyssey 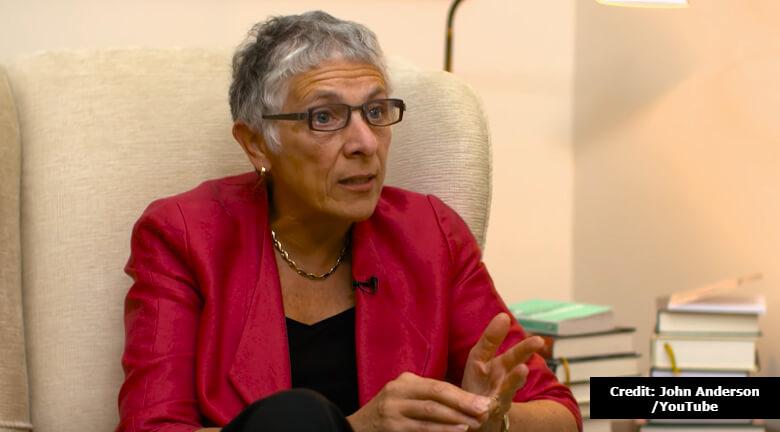 The concept of taqiyya, for its obscurity, has found more relevance amongst conspiracy theorists, pseudo-scholars, and far-right cranks, who argue that this term allows Muslims to lie and deceive in the pursuit of fulfilling racialised conspiracies like ‘Eurabia’.

But in recent years, the concept has found mainstream credence, from failed presidential candidates to certain newspaper columnists.

For experts, however, like Mohammad Fadel, at the University of Toronto, the concept arose during a time of religious persecution, according to comments he gave BuzzFeed last year. He added that it came with some conditions attached, namely that an individual could temporarily hide their Islamic beliefs to escape death or torture, as long as in their hearts, they retained their Islamic faith.

Professor Khaled Abou El Fadl, who teaches law at the University of California at Los Angeles, in comments given to the Washington Post in 2015, echoed Fadel’s point, adding that the term derives from the Arabic for “piety” and “fear of God”.

But on December 2, 2019, the journalist Melanie Phillips, writing in The Times newspaper, argued: “the doctrine of taqiyya, the command to deceive for Islam,” citing professor Sami Mukaram (who passed away in August 2012), who stated this position is ‘mainstream’ Islam.

We’ll return to this claim later.

For now, however, like Ben Carson during his failed presidential run in 2015, this contortion of the concept frames taqiyya as something far more sinister, as Carson claimed that it “even encourages you to lie to achieve your goals”.

The language is markedly similar but sits atop of castle made of sand, the foundations of which crumble upon further scrutiny. And for that, we return to Professor El Fadl, who, in his comments to the Washington Post, added that all Muslims understand that lying is sinful, and that, “there is no concept that would encourage a Muslim to lie to pursue a goal”.

Returning to Phillips’s article, her citation of Mukaram raises more questions, notably about her uses of sources. The quote she attributes to Mukaram reads: “Taqiyya is of fundamental importance in Islam. Practically every Islamic sect agrees to it and practises it”.

The source, however, is not what you’d expect. The results bring you a research fellow at the controversial Middle East Forum (MEF), named Raymond Ibrahim. The MEF helped fund the legal defence fund of Stephen Yaxley-Lennon (aka Tommy Robinson), having done similar funding for the far-right Dutch politician Geert Wilders years earlier. The MEF and David Horowitz Freedom Center have appeared in various reports profiling the lucrative ‘Islamophobia industry’.

One of the first examples of Ibrahim using this quote derives from an article first published on Pajamas Media in February 2009, later republished on the Middle East Forum. Deviating from later iterations of the quote, however, Ibrahim does not mention the author by name but suggests that it remains an authoritative source. Ibrahim went further, inserting the term ‘deception’ in parenthesis – an action which calls into question the legitimacy of their translation. Ibrahim, a fluent Arabic speaker, given his Coptic Egyptian background, had previously served as a regional specialist at the Near East Section of the Library of Congress. It would, therefore, be fair to question that such a translation serves an ideological motive.

A comparison of Ibrahim’s translations over the years, noting subtle but important changes.

Only in future blogs does Ibrahim refer to Mukaram by name, removing his editorialising of the translation, and inserting additional ellipses, not present in 2009, raises further questions. Other selective quotes from the same text appear in Ibrahim’s writings on The Gatestone Institute, which is accused of promoting anti-Muslim prejudice and Islamophobia, a charge it denies.

Ibrahim has gone on to argue that Nazism and Islam are ‘supremacist ideologies’. In this contorted and caustic logic, Ibrahim asserts that Osama bin Laden follows Islam to its ‘core’, as ‘good’ Muslims lack a commitment to their faith.

This single translation swims in a toxic echo chamber, gaining new life in blogs ranging in extremes.Raymond Ibrahim’s writings have appeared on Jihad Watch, a website operated by Robert Spencer, who remains banned from entering the UK.

Others have criticised Ibrahim, suggesting that his interpretation was ‘misleading’ in what “appears to be a polemical piece interspersed with cherry-picked citations from the Quran, the sayings of the Prophet and secondary works”.

So, where did Phillips come across this particular text? We found no examples of this term on her website. Again, it leaves more questions than answers.

Google News lists just four examples where this direct quote, “Taqiyya is of fundamental importance in Islam”, appears. Of these examples, half are the words of Raymond Ibrahim. Excluding Phillips from this list, the other name is Martin Sherman, who quoted Ibrahim in a 2013 blog piece on Barack Obama. Other Google search results rank Ibrahim’s translation very highly. 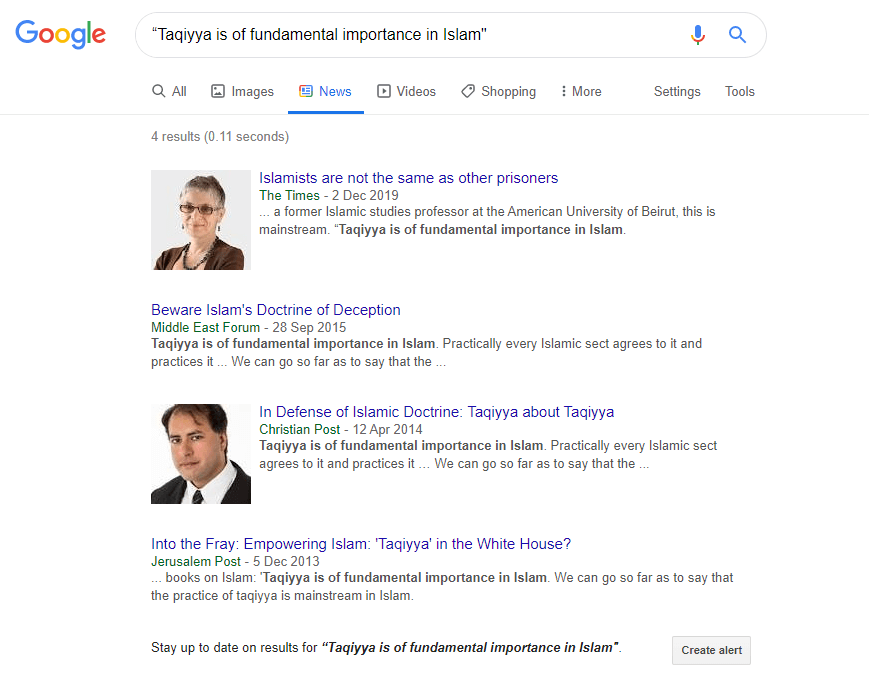 The second half of the quote Phillips uses (“Practically every Islamic sect agrees to it and practises it”) is the only time it appears on Google News as a direct quote.

For additional background, Phillips spoke at three Middle East Forum events between May 2006 and 2010.

Other the years, academics and journalists explored how Phillips helped popularise the racialised conspiracy of ‘Eurabia’, notably in her 2006 book, Londonistan. Tell MAMA highlighted this mainstreaming in their recent annual report.

More broadly, however, Tell MAMA has observed how digital hate cultures focused on spreading racist, anti-Muslim, and Islamophobic content, have spread the conspiracy of taqiyya through memes, language, and image macros.

The far-right agitator, Timothy Burton, now of the disgraced Britain First, was jailed in 2017 for religiously-aggravated harassment which included repeated use of the term taqiyya. Burton had also used Twitter to praise the writings of Ibrahim in 2014.

To help the Crown Prosecution Service better understand anti-Muslim hatred and Islamophobia, Tell MAMA ran training to put terms like taqiyya into a deeper context, and in some cases, like with Mr Burton, were motivated by hate.

To then find this harmful falsehood again appear in a major media outlet is of obvious concern.