No, the Muslims praying in this video aren’t ignoring the coronavirus lockdown. It’s far-right fake news 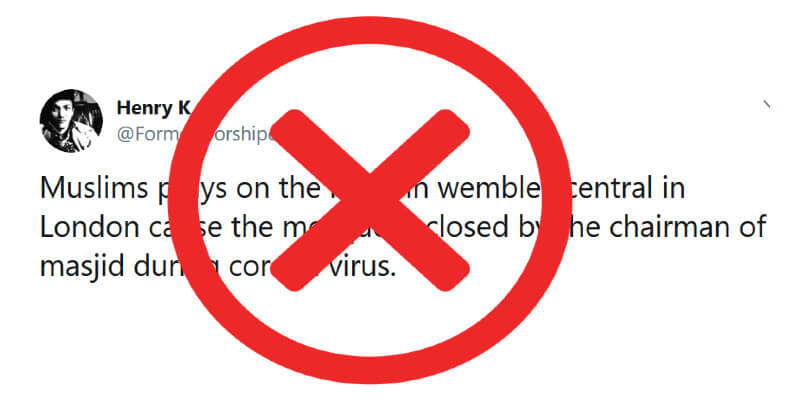 A viral and misleading tweet which attempted to portray a group of Muslims in Wembley, north-west London, ignoring government advice on social distancing during the coronavirus (COVID-19) pandemic, has drawn wide condemnation and reports concerning its breach of Twitter’s hateful conduct policies.

The tweet, which appeared on the platform at 9:43 am on March 25 from a far-right account (which also promotes antisemitic and Islamophobic conspiracies, including the far-right obsessive interest in the obscure concept of taqiyya) has gained over sixteen-hundred retweets as of writing.

The tweet tried to claim that the Muslims were ‘arrogantly’ ignoring medical advice. But after researching the origins of the video, after several members of the public reported the tweet to our service, Tell MAMA can confirm, with a high degree of confidence, that the video is several weeks old, a version of which appeared on Facebook on March 3. Photographs, however, uploaded to the platform on February 28, shared in a negative review of Wembley Central Masjid, from a Muslim man, had lamented how the mosque had been closed for six weeks (over an internal dispute), adding that Friday (Jummah) prayers had to take place on a pavement in the rain.

Six days before the viral anti-Muslim and Islamophobic tweet from the @FormerWorshiper account, the mosque had announced on Facebook that it had suspended all congregational services and activities, reflecting the updated governmental advice regarding the coronavirus pandemic. 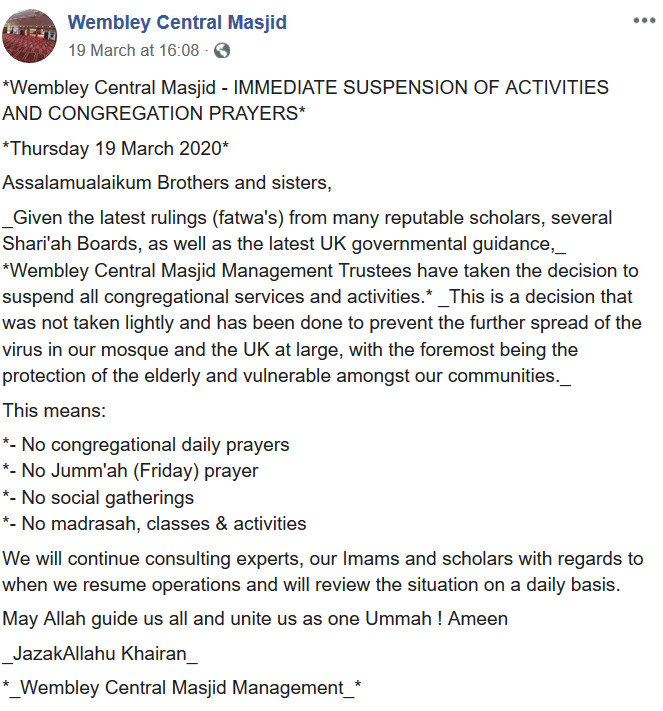 We encourage people to report this misleading tweet, the video, from our initial research, is several weeks old (if not older) and was filmed *before* the advice on social gatherings changed. This is not a new video. And is generating anti-Muslim and Islamophobic responses. pic.twitter.com/DMesZlLLHO

Others have done the same, writing, “FAKE. It hasn’t rained in London in days. Also, look at this racist’s timeline and report it.”

Various Twitter users also highlighted the lack of rain in London (as the video was filmed during in rainy conditions), and condemned its deliberate stoking of anti-Muslim and Islamophobic tensions.

Some were taken in or emboldened by the propaganda, writing, “How about they are arrested & deported for breaking the curfew!!! Remind me, who rules Britain?!!!”. Others called for the police to disperse an event which had occurred weeks prior, as one user even responded that the army should intervene. More ideologically motivated accounts added that Islam should be banned.

We have urged Twitter to revise its policies and allow users to report tweets designed to mislead that stoke racial and religious hatred. And make that request again.

In an effort to promote social media and internet research skills, we have released an educational video for communities.