The findings appeared in the latest Good Relations Indicators published this week by the Executive Office which oversees the coordination of policies and programmes to promote tolerance, peace, and fairness in Northern Irish society.

There were 609 recorded racially aggravated hate crimes compared to 576 recorded sectarian crimes in the previous year.

This trend repeats across hate incidents, defined as a non-criminal incident which is perceived, by the victim or witness, to be motivated by hatred, prejudice, or hostility to a person’s perceived protected characteristic (be it race, religion, or gender identity). Racial hate incidents decreased by 2 per cent, from 1,054 reports in 2016/2017 to 1,025 reports last year, as reports of sectarian incidents saw a slight decrease, from 995 reports in 2016/17 to 879 reports in 2017/18.

Hate incidents flagged as religiously motivated rose by 104 per cent, from 44 reports in the previous year to 90 reports in 2017/18.

Not all hate incidents will satisfy the criminal threshold nor receive a police response but help the police and partner agencies understand where hatred and racism are impacting communities.

Figures released by the Police Service of Northern Ireland (PSNI) last year, however, found that 83 per cent of recorded hate crime did not result in a prosecution or warning to offenders.

Superintendent Emma Bond of the PSNI told the Guardian last year that improvements to its force training will ensure that officers present the strongest evidence to the Public Prosecution Service in Northern Ireland. Adding, that some victims of hate crime seek non-criminal justice outcomes, which includes restorative justice.

Amnesty International UK, however, suggests that this criminal justice gap owes in large part to the role of loyalist paramilitary groups and those linked to such domestic terrorist groups.

Attitudinal surveys found last year that growing number of people in Northern Ireland are concerned about rising racial prejudice over the last five years – a concern which cuts across all age groups, according to the Northern Ireland Life and Times Survey, where 93 per cent of individuals polled did not self-identify as a person of colour.

Despite wide acceptance that migrant workers provide an economic boost and that negative media coverage taints perceptions of migrants, there were many polled who believe that such workers put a strain on health services and that their children put a strain on local schools.

Such a contrast in attitude was evident in the in the Good Relations Indicators, as a clear majority (80 per cent) believe that Protest and Catholic communities add to the diversity and richness of Northern Irish society. This belief drops to 68 per cent when asked if minority ethnic communities increase the richness and diversity of Northern Irish society.

Patrick Corrigan of Amnesty International UK said: “This scale of racial prejudice in 2018 should shock us to our core”.

Minority ethnic communities account for 1.8 per cent (32,400) of the resident population in Northern Ireland, per the 2011 Census.

More than eight hate crime incidents were reported to the PSNI every day in 2016. But the PSNI reported that Northern Ireland had bucked the trend of rising hate crime following the EU referendum result.

High-profile examples of racist or Islamophobic hate crime in Northern Ireland last year included graffiti which read “EU rats out” along with a swastika and the dumping of pig parts outside of an Islamic centre in Belfast.

Following his release from prison, Paul Golding has continued to focus his outreach in areas of Northern Ireland, in areas like Ballymena, with a renewed Northern Irish chapter of the far-right street defence movement Britain First. 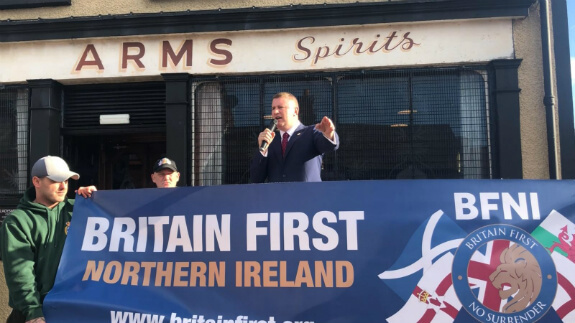 Britain First is hoping to use anti-discrimination laws in Northern Ireland to sue Facebook after the social media platform removed its official pages last year.

Generation Identity, a far-right ethnopluralist and ethnonationalist group targeted a statue in Belfast earlier this year as part of a wider protest calling for a ban on the burqa.

The PSNI is one of many police forces in the UK which have partnership agreements with our service where such partnership work provides added support for victims, and, where needed, to improve police accountability.