Who are the White Pendragons? 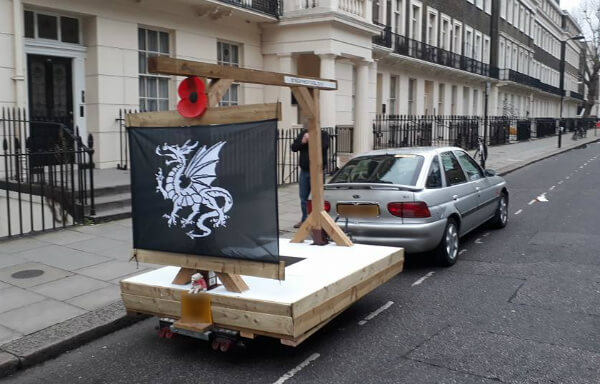 The media fanfare around the failed citizen’s arrest of London’s first Muslim mayor overlooked how activists from the far-right White Pendragons had brought a homemade gallows with them to London.

Sadiq Khan had begun to address the Fabian Society conference on gender equality when the interruption began, delaying his speech for around fifteen minutes, as police removed the individuals.

Paul Brand, a reporter for ITV, interviewed the group, who presented inchoate arguments about the English constitution and the Magna Carta. Brand, to his credit, did identify Davey Russell, a known far-right activist, who desecrated a copy of the Qur’an in a Facebook video in 2014.

Davey Russell is the chairman of the White Pendragons, having registered the website in his name on August 7, 2017.

Kent Police raided Russell’s home in 2014 after his anti-Islam radio show had hijacked the 90.4 FM radio frequency – a breach of the Wireless Telegraphy Act. He now uses Facebook Live and other platforms to broadcast.

If the membership of the White Pendragons could not explain the so-called ‘treason’ of Sadiq Khan to journalists, their website struggles with the same argument. In short, this failure is contingent on their use of the ‘pseudo-legal’ jargon of ‘freeman of the land’ or freemanism, an idea ridiculed and dismissed by various legal bloggers. The leadership have extended this logic to argue for the constitutional right to bear arms.

Graham Moore, listed as the group’s leader, is a former candidate for the far-right English Democrats, and formally of Ukip, who equates the Fabian Society with Mussolini and Oswald Mosley.

Moore also calls Islam a ‘cult’ which should be banned. He has linked to a website, likely his own, which advocates for the reclassification of Islam as a ‘genocidal and political ideology’. Months earlier, he tweeted: “Did you know it is illegal to wear a political uniform in this Country. Islam is political and therefore should not be allowed Islamic dress.” Another tweet inferred that the Qur’an is more ‘anti-Jew’ than Hitler’s Mein Kampf.

He has attacked Sadiq Khan on social media, in one tweet suggesting that Khan’s agenda is that of the Muslim Brotherhood. On Facebook, Moore shared a racialised meme about ‘Londonistan’, editing the meme further to insert the word ‘Fabian’ on Khan’s forehead.

The leadership remains very active on social media, with supporters populating a closed Facebook group. An admin for this page shared a long anti-Islam screed last year, stating that, ‘THE COMMON GOAL IS TO FUCK ISLAM OFF.’ A Facebook user listed under the merchandise section of the White Pendragons had uploaded photos of various anti-Islam t-shirts. One such example juxtaposed a skull against the text ‘Islam is a death cult’.

Nor had the leadership of the White Pendragons been secret about their intentions for this provocative stunt. On January 12, at 10:14 pm, Davey Russell tweeted the hashtag #nooseontheloose, a supporter then replied ‘# every fucking Fabian’. Graham Moore, on Facebook Live, said: “We need action people, and that action starts tomorrow.” He added, “You know who you are and you will be with us. Those who have got tickets to Madame Tussauds in London, you should be there at 8:30 am.” The social media pages of the White Pendragons then claimed that the Madame Tussauds meeting point was a ‘decoy’.

Moore went on to discuss how the Magna Carta and common law is being subverted by ‘the Fabian Society, by the Rothschild, by the Rockefellers, by the London School of Economics. It has been a conspiracy against the constitution, and the person standing up against that is President Donald Trump.”

Given the media interest in the group, Moore issued a statement On January 15, decrying the apparent influence the Fabian Society has over British politics, stating:

The Fabian Society has corrupted politics and conned the working class since its inception in 1884, financed by Industrialists and bankers (Rockefella and Rothschilds), setting up the London School of Economics and abiding by their emblem “a wolf in sheep clothing” and a gradual strategy.

The source for this argument appears on an obscure website called ‘Free Britain Now’ which displays a disturbing and obsessive interest in promoting conspiracies about the apparent influence of the Rothschilds, a myth popular with antisemites. Moore tweeted a link to this blog on January 5, 2018.

Despite the interruption, Khan added: “It is a pleasure to be here even though we were distracted by the actions of what some would call very stable geniuses.”