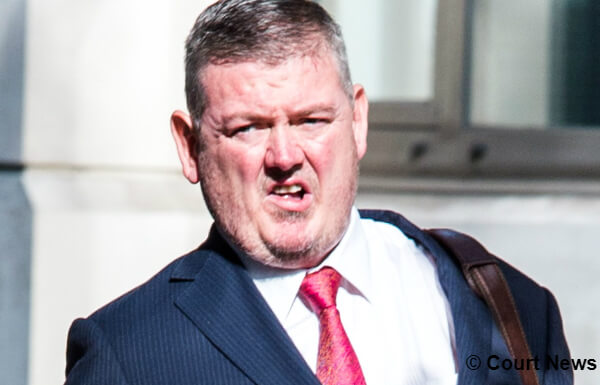 A management consultant has admitted placing Islamophobic and racist stickers across London.

Neil Froggatt (pictured), 48, placed the Pokemon-style stickers with the tagline, ‘Gotta catch and deport them all’ on bus stops, a cash machine, and at a London Underground station in November 2016.

This case is a high-profile example of how actions on social media blur into activities in the offline world.

A Twitter account alleged to have been linked to Mr Froggatt, named @Bad_Sweary_Frog, encouraged others to participate in the campaign on social media in two and distinctly important ways: from encouraging followers to private message for copies of the stickers, and by encouraging supporters to join in with the hashtag ‘#Pakemon’.

For example, on November 14, 2016, the @Bad_Sweary_Frog account tweeted an image of a dehumanising sticker which compared Muslim women in the niqab to the fictitious Nazgul characters found in Tolkien’s The Lord of the Rings, with the caption: “I am looking for some London/South-East based patriots to join an upcoming sticker campaign. #pakemon”.

A website was also created to host images of each sticker.

As condemnation of the campaign grew, and a police investigation began, the ‘Pakemon’ campaign had curiously gained the interest of the now-defunct pro-Kremlin Russian news outlet Life, formally LifeNews, on November 26, 2016, and the article appeared on their Twitter feed three days later.

The article, written by Ekaterina Korostichenko, referenced the police investigation but gave their readers detailed examples of each sticker, including examples of what others had created online in support of the campaign. Ms Korostichenko, however, did embed various tweets from the @Bad_Sweary_Frog account, which included examples like “I caught two Pakèmon at Earlsfield station. #pakemon Gotta catch and deport them all! 225 Terror points!”. Other tweets embedded in the article confirm that stickers had also appeared at Wimbledon station. The use of terminology like ‘Paedostani’ is demonstrative of the racialisation of the criminal child sexual exploitation scandals.

Other examples in the campaign included stickers which labelled London Mayor Sadiq Khan ‘Hamaskhan’ – Tell MAMA has documented other examples of how the far-right and others have demonised Khan as either a terrorist or an existential threat to the UK.

A sticker of former US President Barack Obama perpetuated the racialised myth that he was Muslim. And, in a clear example of misogynoir, the sticker also targeted the best-selling author and wife of Mr Obama, Michelle.

The notorious Twitter account @onlinemagazin, which, at its height, had gained over 77,000 Twitter followers, tweeted: “🆘‼️😈👍 Haha! This is Brilliant! Do you already know “Pakémon”?” on November 26, 2016.

Tell MAMA has long-documented the influence of accounts like @Bad_Sweary_Frog in its annual report, The Geography of anti-Muslim Hatred, published in 2016. The report highlighted how aggressive retweeting, which is a breach of Twitter’s policies, is a tactic of Islamophobic and far-right echo chambers online. The @Bad_Sweary_Frog account, when sharing photographs of the stickers, tagged in the same 8 or 9 Twitter accounts in each post, which likely helped amplify their reach online, and demonstrates the insular nature of such online spaces.

The ‘Pakemon’ campaign was positively received by some white nationalists online.

The judge, Ian Darling, has not ruled out a custodial sentence.

Neil Froggatt has been bailed and will return for sentencing on March 11.