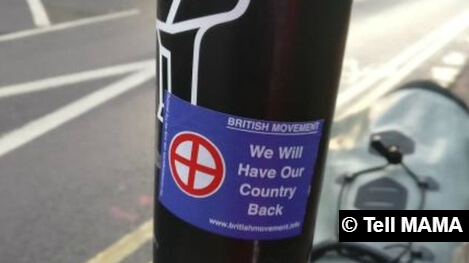 A cyclist removed a sticker on a lamppost which promoted the neo-Nazi group the British Movement, which had appeared a ‘short walk’ from Regent’s Park mosque in London.

The incident occurred on December 19.

Speaking to Tell MAMA, the cyclist, who wishes to remain anonymous, described how, when cycling laps around Regent’s Park, had chanced upon the sticker, which, in their estimation, was a ‘5 to 10-minute walk’ from the mosque.

In 2017, there were 11 verified reports of hate speech, and 28 reports of anti-Muslim literature reported to Tell MAMA.

The Metropolitan Police have been made aware of the incident.

UPDATE (21/12/2018): A sticker promoting The British Movement was spotted in the Kentish Town area of London by a member of the public on December 7. The sticker reads, ‘Stop building mosques in Britain’, the Metropolitan Police have been made aware of the incident. 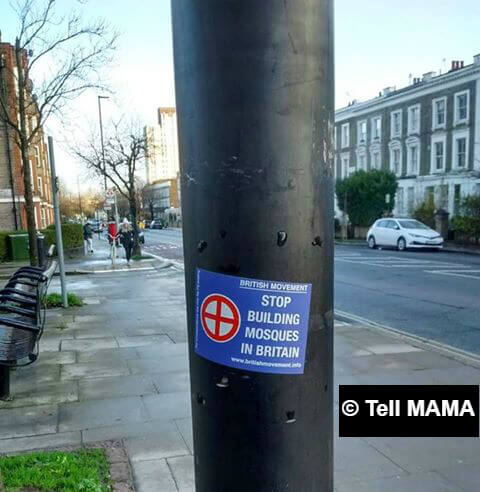 UPDATE (03/01/2019): Labour councillor Varinder Singh, who represents the ward of Cranbrook, in the London borough of Redbridge, tweeted, “Been made aware of the presence of this sticker in my ward near Gants Hill and am arranging for its immediate removal. ❌⛔️Racists, Fascists and Islamophobes not welcome in Cranbrook⛔️❌.” Cllr Singh confirmed to Tell MAMA that the police have been made aware of the sticker. 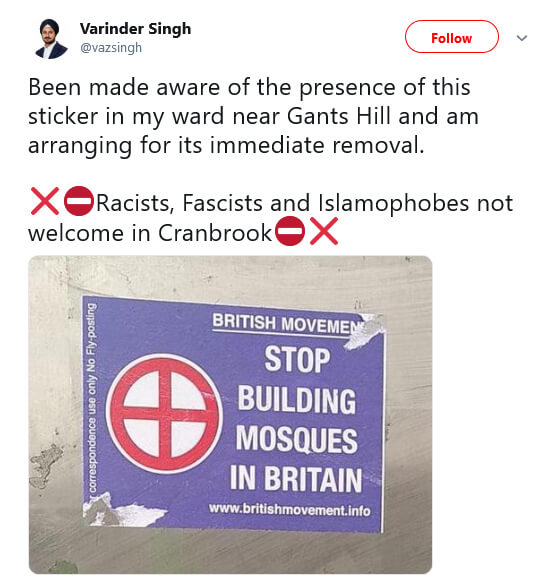