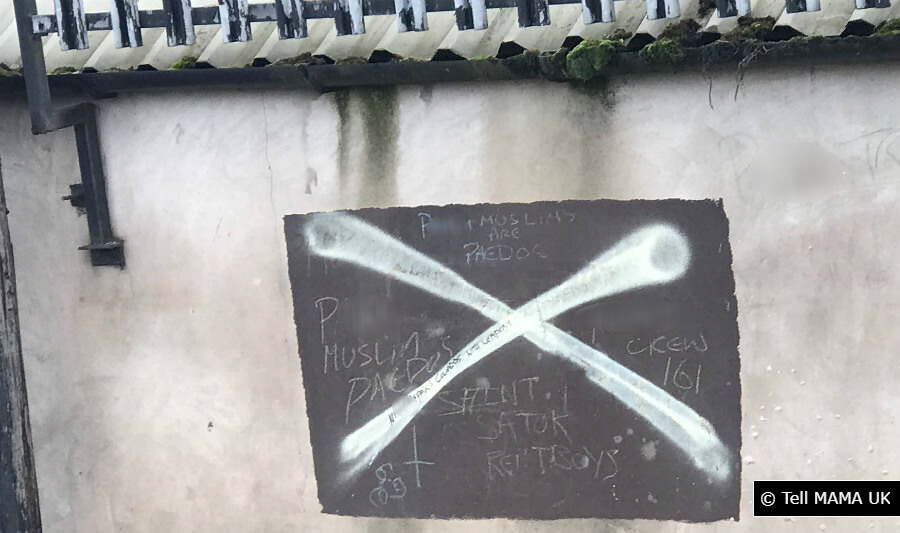 Racist graffiti accusing Muslim and Pakistani men of being paedophiles has reappeared on the same wall in Birmingham a year after Tell MAMA first reported it.

The graffiti appeared sometime over the weekend, and reads as “P*ki + Muslims are paedos” and “P*ki Muslim paedos”, alongside satanic iconography and other examples of racist language.

Local councils, including Birmingham City Council, aim to remove racist and offensive graffiti within 24 hours of notification, to find your local council in England and Wales, search via your postcode on the Gov.uk website.

Individuals can report such incidents in Scotland by locating their local councils via the MyScot.gov website and in Northern Ireland, through the nidirect website.

The police can also be made aware of such hate crimes through the 101 non-emergency telephone number, or reported online through True Vision.

Tell MAMA has continued to document, how, in recent years, similar examples of racialised and inflammatory graffiti has targeted Muslim communities in the Birmingham area and beyond.

The report also found, “there are ongoing debates around the ethnicity of perpetrators of group-based CSE, of over-representation, ‘shoddy’ research, and data collection methods”, adding that the media coverage afforded to CSE victims from minority backgrounds has been lacking.

How such narratives harm Muslims in the offline, real-world has included threats, abuse, and in one notable tragedy, murder.