How Christchurch still influences far-right terror convictions in the UK

Three years after the murder of 51 Muslims in Christchurch, New Zealand, footage of that tragedy, committed by a white supremacist terrorist, continues to influence those convicted of far-right terror offences in the UK, our investigation found.

Our starting point is the conviction of 19-year-old Mason Yates last month – a self-identified “literal Nazi” who took an interest in the Christchurch terrorist, downloaded two terrorist manuals and spread vast amounts of racist and homophobic hate on Telegram. During his teens, Yates received two Prevent referrals, with the second referral coming from his college, aged sixteen. He would boast, “I’m as far right as you can be” and “I haven’t got just an issue with Muslims, it’s the whole of Islam,” and wore a pro-Ukip bracelet. Yates disengaged from Prevent after their father declined assistance.

We shift attention to Keighley in West Yorkshire and Anglesey in Wales, as the Telegram channel used a fascist terror cell, mainly of individuals from Keighley in West Yorkshire, before their convictions, including various racist and terrorist materials, were uploaded, including a copy of the Christchurch live stream. Samuel Whibley, a cell member from Anglesey, admitted to sharing the notorious neo-Nazi terror book Siege and was later found guilty of eight terrorism offences that included the encouragement of terrorism (contrary to Section 1 of the Terrorism Act 2006).

Following the jailing of the far-right terrorist Connor Burke in February 2022 – a 19-year-old from Bexleyheath, it emerged that he had a copy of the live stream on his PC, along with other white supremacist propaganda and paraphernalia (including a copy of Hitler’s Mein Kampf and SS-branded daggers. Burke received a three-and-a-half-year prison sentence after disguising bomb-making guides as PDF files for the video game Minecraft. He also used a Telegram channel to spread white supremacist materials and referred to his teaching staff in racist terms – using the P-word.

In October 2021, neo-Nazi Sam Imrie, 24, guilty of various terrorism offences, threatened to burn down Fife Islamic Centre. Police recovered various weapons, possession of child abuse images and violent, necrophilic pornography. He plotted to live stream the attack on the Islamic centre. Nevertheless, it went further still: Imrie saw the Christchurch terrorist like the above – as a hero (indeed, a ‘saint’, mirroring the language of neo-Nazis in other countries). He believed they had done ‘nothing wrong’ and admitted to watching the murders several times as police recovered several copies of the live stream from an iPhone.

Weeks earlier, a 14-year-old neo-Nazi avoided prison after creating a Telegram channel to promote racist terrorism towards minorities in Dover. That group, identified as the ‘British Hand’, boasted a core membership of fifteen people aged in their teens to mid-twenties, according to The Times. Members within the chat also glorified Breivik and the Christchurch terrorist. 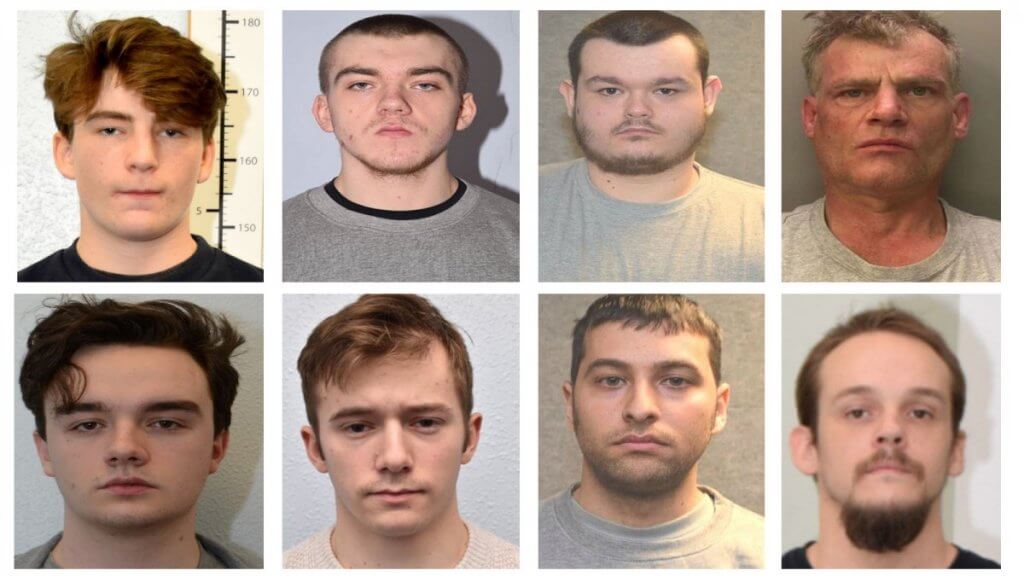 18-year-old Matthew Cronjager, a member of the fascist ‘British Hand’ Telegram channel, called for racist and anti-LGBT+ violence and terror – targeting Muslim, LGBT+, and Jewish communities also possessed a copy of the Christchurch live stream on his mobile phone. Cronjager helped build a library of white supremacist propaganda, expressed a desire to build weapons from a 3D printer, and shared materials that could assist those seeking to commit acts of terrorism – leading to an 11-year prison sentence.

White supremacists in an older age bracket would find themselves jailed in the summer of 2021, including a 53-year-old white supremacist named Nicholas Brock. He received a three-year prison sentence in May 2021 for terrorism-related offences and owned various Nazi-era knives and other fascist propaganda, including a copy of the Christchurch terror footage.

The second example concerns 38-year-old neo-Nazi Michael Nugent, who ran several neo-Nazi Telegram channels to distribute racist propaganda and terrorist materials. On the first anniversary of the terror attacks in Christchurch, Nugent uploaded the live stream and a copy of the infamous screed (‘manifesto’). In addition, he boasted in a private diary that the terrorism inflicted upon Muslims in Christchurch was a “game changer” as his prison sentence increased to five years later that year.

Also, in May 2021, 24-year-old Robert Gregory from Bournemouth received a four-and-a-half-year prison sentence for terrorism offences. Gregory is a violent fantasist who dreamed of assassinating the former prime minister Theresa May and had extensive internet searches about murdering Muslims, buying a gun from his local area, and how to build viable explosives. Gregory divulged other violent fantasies in his diary, including his hope of murdering other MPs, killing a journalist live on-air and blowing himself up inside a mosque or at a Pride rally. He hoped to recruit others to his cause.

Further chilling diary extracts reported in the local press concerned how Gregory wished that the Christchurch terrorist had murdered more Muslims. For example, that entry read: ” ‘Got news of terror attack in New Zealand finally we are taking a stand.

“Why do Muslims continue to condemn attacks on their own people not the ones on us?” 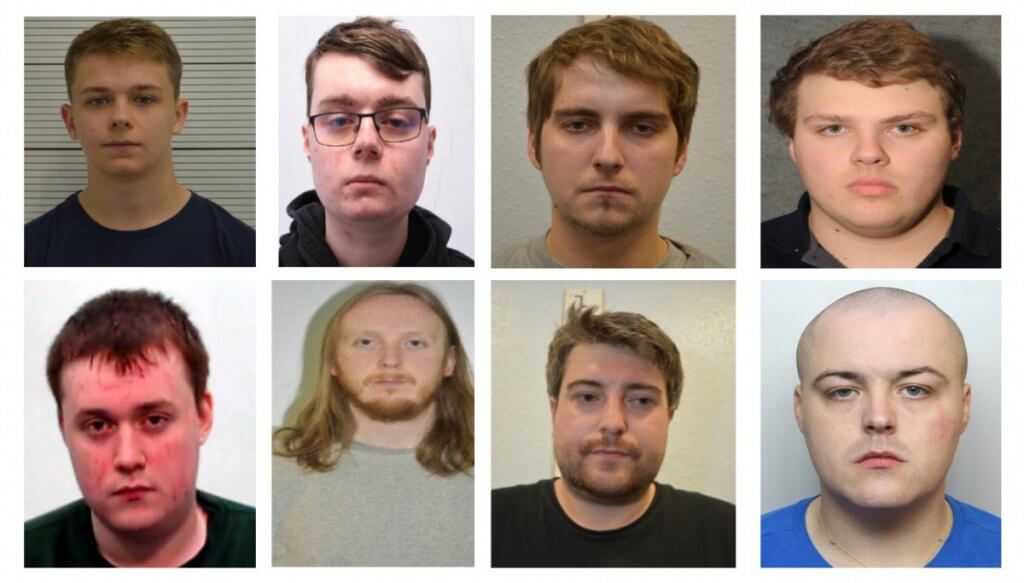 A disgraced former member of the armed forces, neo-Nazi Dean Morrice, 34, was jailed for multiple terrorism offences in June 2021 – including stockpiling explosive materials. Morrice possessed terrorism documents and instructions to make a 3D-printed gun. During the trial, Morrice claimed past affiliation to Ukip and the strong support of Nigel Farage. He also shared an edited version of the terrorism in Christchurch, strumming a guitar to the sound of gunshots. Avon and Somerset Police confirmed that Morrice possessed copies of various far-right terrorist screeds.

The previous year included several high-profile far-right-related terrorism convictions where evidence of their possession of the terror attacks in New Zealand appeared in press coverage. For example, in December, 23-year-old Luke Hunter received a prison sentence for several terrorism-related offences, including membership in the proscribed Feuerkrieg Division and a dizzying number of digital platforms to spread neo-Nazi hate, including calls for the genocide of Jewish communities, minority ethnic groups, and LGBT+ communities. On Telegram, Hunter glorified various neo-Nazi terrorists – including David Copeland and the Christchurch terrorist.

Weeks earlier, it emerged that 18-year-old Harry Vaughan, guilty of various far-right-inspired terror offences, possessed a copy of the live stream, violent child abuse images (having admitted creating one such image), and other far-right literature with materials concerning the building of bombs and firearms.

A teenage member of this terror group, named because of the circumstances of the case, pleaded guilty to nine counts of possessing terror manuals and a copy of the Christchurch terror video. Paul Dunleavy, 17, received a prison sentence of five years and six months.

By May of that year, two high-profile cases resulted in criminal justice outcomes, including that of 26-year-old Luton-based Filip Golon Bednarczyk – who possessed a copy of the screed and horrific memes mocking the terror of 15 March. Following his conviction, which included admitting possession of a 2kg bag of an explosive substance, identified as sulphur powder under suspicious circumstances, we exclusively revealed his history of anti-Muslim and anti-LGBT hate on Facebook.

Ben Hannam, a probationary police officer at the Metropolitan Police, was found guilty of belonging to the proscribed neo-Nazi terror group National Action (which we have covered extensively) in April 2021. The BBC reported that Hannam, 22, downloaded a fascist propaganda image sanctifying the Christchurch terrorist.

Twenty-year-old George Fowle from the town of Snodland in Kent received a suspended prison sentence after accessing terrorist materials, alongside accessing materials to build plastic explosives at 17. KentOnline reported that Fowle had over 400 photos of neo-Nazi and far-right materials, including pro-Hitler materials. In addition, Fowle owned a copy of the Christchurch terror attack, having received the footage over Snapchat. The BBC revealed that Fowle’s college made a Prevent referral after a classmate raised concerns that he risked becoming a “school shooter”. News of Fowle’s conviction appeared in the local council’s annual Prevent report for 2020.

In October 2019, Morgan Seales (known to the authorities after flyering for National Action), 20, and Gabriele Longo, 26, were guilty of using a white supremacist WhatsApp group chat (with members as young as 14 years old) to call for copycat terror attacks uploading bomb-making instructions to the group. And when another group member posted, “let’s kill some Muslims”, Longo replied, “Or Jews.” Other messages revealed talk of targeting worshippers at a mosque during Jummah (Friday) prayers.

One of the most immediate and abhorrent acts of white supremacist terror domestically was committed by 50-year-old Vincent Fuller, who admitted to stabbing a Bulgarian man, Dimitar Mihaylov, as he searched out a Muslim person to murder a day after the tragedy occurred. Fuller also glorified the Christchurch terrorist on Facebook. As a result, he received a prison sentence spanning 18 years and nine months – with an additional five-year extended sentence.

Distinguished Professor, College of Humanities and Social Sciences, Massey University, Paul Massey, when outlining the globalised influence of the terror in Christchurch (which we also covered), reflected in March 2020 on the necessity of an equivalent version of Tell MAMA in New Zealand.

Chapter 4: Hate crime and hate speech (76) reads: There have been calls for better records to be kept of hate-motivated offending complaints and official acknowledgements that such records are desirable. We note that recently the Foundation Against Islamophobia and Racism has established an online mechanism for recording hate-motivated offending in New Zealand based on the United Kingdom’s Tell MAMA (Measuring Anti-Muslim Attacks) model”. Credit: The Royal Commission of Inquiry into the terrorist attack on Christchurch masjidain on 15 March 2019.

The Royal Commission of Inquiry into the terrorist attack on Christchurch masjidain on 15 March 2019 would confirm that such an organisation now existed – the Foundation Against Islamophobia and Racism.

UPDATE: 25-year-old Elliot Brown was found guilty of two terrorism offences at Bristol Crown Court on January 16, 2023, including for sharing an instructional video of how to create the explosive substance thermite via their Amazon device to a far-right Telegram channel.

Far-right terror: neo-Nazi jailed for encouraging others to make explosives

We welcome the jailing of Elliot Brown, 25, who encouraged others to make thermite, inspiring Dean Morrice – convicted of various far-right terror offences in 2021.https://t.co/9yYASc54ZB

For comment or further analysis of this issue, please email info@tellmamauk.org